How “real” is the virtual world? Is it more than a cartoon, a video game or a fantasy? And what does “real” mean, anyway?

There are many shades of real.

We might say that something is “realistic” if it closely resembles reality. Subtle shading and shadows in the corners of a room, or motion capture animation may make a scene look “almost like” the real thing. To say something is “realistic” acknowledges the craftsmanship of its creator. But saying that something is “almost like” the real thing is an admission that it’s not the real thing. It may resemble a real tree, but it is not, in fact, a physically real tree—it is a collection of pixels. I don’t think very many people believe that the virtual world is the same as the physical world.

That doesn’t mean it’s not real.

Whether or not it’s physically real, the virtual environment can affect us physically. It’s like when a skillful filmmaker weaves together story, cinematography, acting and other elements to make light, color and motion affect us emotionally, and even physically if we recoil in a horror movie or weep over a sad ending. In the same way, a well crafted scene in a virtual world can evoke real-world physical sensation and emotion. The serenity of a quiet virtual forest, under a protective canopy of giant trees, with sounds of birds, brooks and breezes actually calms my physical body in the “real” world. The desolation of a vacant shack on a dry, windswept plain makes me cough as if I can feel the swirling dust catch in my throat. Standing around in a virtual snow scene makes me feel cold in the physical world—and putting a sweater on my avatar warms me up.

We all know that the emotions we experience through our encounters in the virtual world are real. The whole gamut, from mirth to rage, wonder to repulsion, heartbreak to love—yes, love—all just as authentic as if they were triggered by events in the physical world. And the qualities of the human spirit we encounter are also real: generosity, creativity, selflessness and selfishness, forthrightness and deceit. 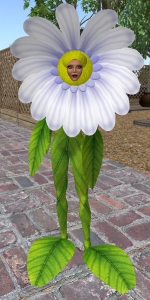 So, is the virtual world real?

A better question would be: are your experiences real? Does the virtual world evoke real emotions and sensations? Is pleasure real? Is inspiration real? Is friendship real? Is excitement real? Is beauty real? Is laughter real? Are art, craftsmanship and creativity real? Dare I ask: is love real?

Some people ascribe no reality to the virtual world; they see it as a cartoon, with no value in and of itself. They treat it as if it were only a screen separating them from other “real” people. They seem impatient, then, to get past this screen and connect with a physical person, who is, to them, the only person who matters. These are people who typically don’t put much effort into their avatar, since the virtual world is not important to them. They don’t care about their avatar, or yours, but they are very interested in who you are in “real” life, where you live, what you look like, how old you are, etc. For them, the virtual world is not real at all. For them, the physical world is the only reality.

On the other end of the continuum, some of us inject so much of our conscious awareness into our avatar that our physical self becomes secondary. As in the movie “Surrogates” I live through my avatar much more than through my physical self. If you only know me in the physical world, you don’t really know me. Camryn Darkstone is the “real” me. In the virtual world, I am freed from some of my physical limitations and allowed to be my most authentic self. Of course it can’t be carried to extremes, since I do enjoy some pleasures with my physical body that aren’t available in the virtual world, for example singing and food. But in terms of my sense of self, and everything else that is most important, I am much more present as Camryn Darkstone.

For others, the avatar is a fantasy, a character they have created, through which they role-play. Some even view the avatar as a separate person, with a life of its own. I know at least one person who, when speaking as his avatar, refers to himself in the third person, as though he and his avatar were two different people. The avatar refers to “that person behind the keyboard” as if it were someone else.

It is also strengthened by the culture of our family. Whereas many people draw strict boundaries of anonymity and privacy when interacting in the virtual world, within my family we are very open. Each of them, for me, is the same type of blended virtual-physical person as I am. We don’t role-play, we are our authentic selves. I voice with them. They know my real name, and some even know my address (and are likely to send me mail order gifts, as I do for them). My Master has been to my home. They know what I look like, where I work and what I do for enjoyment. And yet, even with all of this “real” world information, I am still Camryn Darkstone to them. I am one person—submissive, builder, tree lover, horse racing enthusiast, fashionista, bourbon connoisseur, anglophile, musician. This—all of this, virtual and physical—is Camryn Darkstone.

I am not a virtual person. I am a real person in a virtual world—a real person whose real life is extended, enriched and enhanced beyond the limits of the so-called “real” world.

After more than two decades exploring 3D virtual worlds and their possibilities for relationship and self expression, Camryn Darkstone is leading a life of quiet contentment, building and landscaping for Littlefield Grid with occasional projects in Second Life. Camryn has been active in online communities since the early 1980s, and, under other names, has written extensively about the ways that people relate to one another on the internet. Since 2009 Camryn has enjoyed a loving, consensual D/s relationship as submissive to Walter Balazic in both the virtual world and the "real" world. View all posts by Camryn Darkstone